Your pregnancy and baby guide

Symptoms appear 1 to 3 weeks after being infected.

Symptoms appear 1 to 3 weeks after being infected.
Infectious period: The most infectious time is 1 to 2 days before the rash appears, but it continues to be infectious until all the blisters have crusted over. 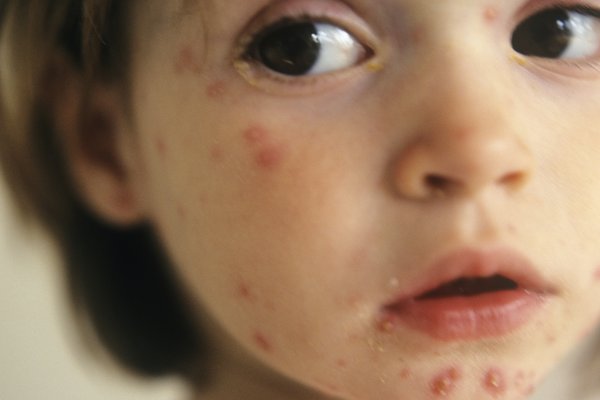 Chickenpox is a mild infectious disease that most children catch at some time. It starts with feeling unwell, a rash and, usually, a fever.

Spots develop, which are red and become fluid-filled blisters within a day or two. They eventually dry into scabs, which drop off.

The spots first appear on the chest, back, head or neck, then spread. They don't leave scars unless they're badly infected or picked.

You don't need to go to your GP or accident and emergency (A&E) department unless you're unsure whether it's chickenpox or your child's very unwell or distressed.

Keep your child away from anyone who's pregnant or trying to get pregnant.

If your child had contact with a pregnant woman just before they became unwell, let the woman know about the chickenpox and suggest that she sees her GP or midwife.

For women who have never had chickenpox, catching the illness in pregnancy can cause miscarriage, or the baby may be born with chickenpox.

Find out more about chickenpox

See a visual guide to rashes in babies and children

Symptoms appear 7 to 12 days after being infected.
Infectious period: From around 4 days before the rash appears until 4 days after it's gone.

Measles is much more serious than chickenpox, german measles, or mumps. It's best prevented by the MMR vaccination. Serious complications include pneumonia and death.

Find out more about measles

Symptoms appear 14 to 25 days after being infected.
Infectious period: From about 6 days before swelling in the face until about 5 days after.

Your child's face will be back to normal size in about a week.

It's rare for mumps to affect boys' balls (testes). This happens more often in adult men with mumps.

If you think your child's testes are swollen or painful, see your GP.

Find out more about mumps

Pregnant women or women planning to become pregnant should see their GP or midwife as soon as possible if they come into contact with the infection or develop a rash.

Symptoms appear 15 to 20 days after being infected.
Infectious period: From 1 week before symptoms develop until up to 4 days after the rash appeared.

It can be difficult to diagnose rubella with certainty.

Keep them away from anybody who's in the early stages of pregnancy (up to 4 months) or trying to get pregnant.

If your child has had contact with any pregnant women before you knew about the illness, you must let the women know, as they'll need to see their GP.

Find out more about rubella

Symptoms appear 6 to 21 days after being infected.
Infectious period: From the first signs of the illness until about 3 weeks after coughing starts. If an antibiotic is given, the infectious period will continue for up to 5 days after starting treatment.

Antibiotics need to be given early in the course of the illness to improve symptoms.

Find out more about whooping cough