Skip to main content
Developmental dysplasia of the hip

Developmental dysplasia of the hip (DDH) is a condition where the "ball and socket" joint of the hip does not properly form in babies and young children.

The hip joint attaches the thigh bone (femur) to the pelvis. The top of the femur (femoral head) is rounded, like a ball, and sits inside the cup-shaped hip socket.

In DDH, the socket of the hip is too shallow and the femoral head is not held tightly in place, so the hip joint is loose. In severe cases, the femur can come out of the socket (dislocate).

Without treatment, DDH may lead to problems later in life, including:

With early diagnosis and treatment, most children are able to develop normally and have a full range of movement in their hip.

Your baby's hips will be checked as part of the newborn physical examination within 72 hours of being born.

The examination involves gently moving your baby's hip joints to check if there are any problems. It should not cause them any discomfort.

Your baby should have an ultrasound scan of their hip before they're 2 weeks old if a doctor, midwife or nurse thinks their hip feels unstable.

Babies should also have an ultrasound scan of their hip before they're 6 weeks old if:

If you have had twins or multiples and 1 of the babies has any of these risk factors, each baby should have an ultrasound scan of their hips by the time they're 6 weeks old.

Sometimes a baby's hip stabilises on its own before the scan is due, but they should still be checked to make sure.

Babies diagnosed with DDH early in life are usually treated with a fabric splint called a Pavlik harness.

This secures both of your baby's hips in a stable position and allows them to develop normally. 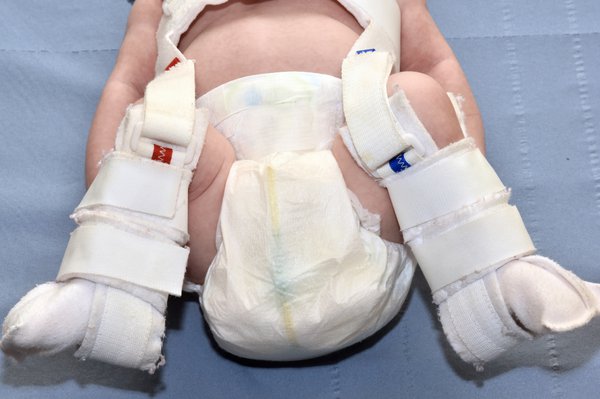 The harness needs to be worn constantly for several weeks and should not be removed by anyone except a health professional.

The harness may be adjusted during follow-up appointments. Your clinician will discuss your baby's progress with you.

Your hospital will provide detailed instructions on how to look after your baby while they're wearing a Pavlik harness.

This will include information on:

Eventually, you may be given advice on removing and replacing the harness for short periods of time until it can be permanently removed.

You'll be encouraged to allow your baby to move freely when the harness is off. Swimming is often recommended.

Surgery may be needed if your baby is diagnosed with DDH after they're 6 months old, or if the Pavlik harness has not helped.

The most common surgery is called reduction. This involves placing the femoral head back into the hip socket.

Reduction surgery is done under general anaesthetic and may be done as either:

Your child may need to wear a cast for at least 12 weeks after the operation.

Their hip will be checked under general anaesthetic again after 6 weeks, to make sure it's stable and healing well.

After this investigation, your child will probably wear a cast for at least another 6 weeks to allow their hip to fully stabilise.

Some children may also require bone surgery (osteotomy) during an open reduction, or at a later date, to correct any bone deformities.

The newborn physical examination, and the usual check at 6 to 8 weeks, aims to diagnose DDH early.

But sometimes hip problems can develop after these checks.

It's important to contact a GP as soon as possible if you notice your child has developed any of the following symptoms:

Your child will be referred to an orthopaedic specialist in hospital for an ultrasound scan or an X-ray if your doctor thinks there's a problem with their hip.

It's important to remember DDH cannot be prevented and it is nobody's fault.

A baby's hips are naturally more flexible for a short period after birth. But if your baby spends a lot of time tightly wrapped (swaddled) with their legs straight and pressed together, there's a risk this may affect their hip development.

Using hip-healthy swaddling techniques can reduce this risk. Make sure your baby is able to move their hips and knees freely to kick.