The contraceptive patch is a small sticky patch that releases hormones into your body through your skin to prevent pregnancy. In the UK, the patch's brand name is Evra. 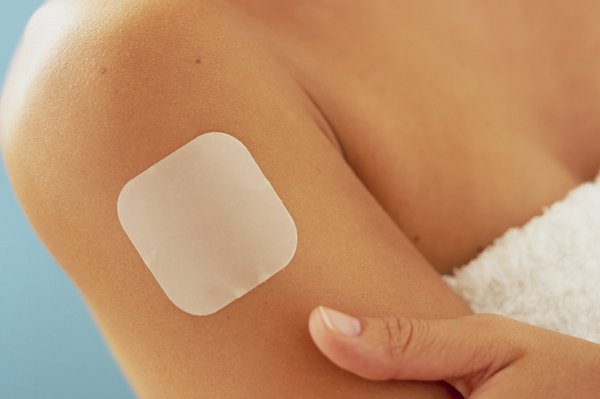 The patch releases a daily dose of hormones through the skin into the bloodstream to prevent pregnancy.

It contains the same hormones as the combined pill – oestrogen and progestogen – and works in the same way by preventing the release of an egg each month (ovulation).

It also thickens cervical mucus, which makes it more difficult for sperm to move through the cervix, and thins the womb lining so a fertilised egg is less likely to be able to implant itself.

Apply your first patch and wear it for 7 days. On day 8, change the patch to a new one. Change it like this every week for 3 weeks, and then have a patch-free week.

During your patch-free week you'll get a withdrawal bleed, like a period, although this may not always happen.

After 7 patch-free days, apply a new patch and start the 4-week cycle again. Start your new cycle even if you're still bleeding.

Where to put the patch

Stick the patch directly onto your skin. You can put it onto most areas of your body, as long as the skin is clean, dry and not very hairy. You shouldn't stick the patch onto:

It's a good idea to change the position of each new patch to help reduce the chance of skin irritation.

If you start using it on any other day, you need to use an additional form of contraception, such as condoms, for the first 7 days.

If you have a short menstrual cycle with your period coming every 23 days or less, starting the patch on the fifth day of your period or later means you may not be protected against pregnancy and will also need additional contraception for the first 7 days.

You can talk to a GP or nurse about when the patch will start to work, and whether you need to use additional contraception in the meantime.

The contraceptive patch is very sticky and should stay on. It shouldn't come off after a shower, bath, hot tub, sauna or swim.

If the patch does fall off, what you need to do depends on how long it has been off.

If it's been off for less than 48 hours:

If it's been off for 48 hours or more, or you're not sure how long:

If you forget to take a patch off, what you should do depends on how many extra hours it has been left on.

If you forget to take the patch off after week 3, take it off as soon as possible. Start your patch-free break and start a new patch on your usual start day, even if you're bleeding. This means you won't have a full week of patch-free days.

You'll be protected against pregnancy and won't need to use any additional contraception. You may or may not bleed on the patch-free days.

Put on a new patch as soon as you remember. This is the beginning of your new patch cycle. You'll now have a new day of the week as your start day and change day.

If you're more than 24 hours late sticking on the patch (the interval has been 8 days or more), you may not be protected against pregnancy and will need to use additional contraception, such as condoms, for 7 days.

See a GP or nurse for advice if you've had unprotected sex in the patch-free interval, as you may need emergency contraception.

Some women don't always have a bleed in their patch-free week. This is nothing to worry about if you've used the patch properly and have not taken any medicine that could affect it.

See a GP or nurse for advice if you're worried, or do a pregnancy test to check if you're pregnant.

If you miss more than 2 bleeds, get medical advice.

The contraceptive patch isn't suitable for everyone, so if you're thinking of using it, a GP or nurse will need to ask about you and your family's medical history. Tell them about any illnesses or operations you've had, or medicines you're taking.

You may not be able to use the patch if:

You may also not be able to use the patch if you have or have had:

There is a very small risk of some serious side effects when you use a hormonal contraceptive, such as the contraceptive patch.

For most women, the benefits of the patch outweigh the possible risks, but you should discuss all risks and benefits with a GP or nurse before starting the patch.

A very small number of people using the patch may develop a blood clot in a vein or an artery. Don't use the patch if you've had a blood clot before.

Your risk is higher if:

Research suggests that people who use the contraceptive patch have a small increased risk of being diagnosed with breast cancer compared with those who don't. But this reduces with time after stopping the patch.

Research also suggests there's a small increase in the risk of developing cervical cancer with long-term use of oestrogen and progestogen hormonal contraception.

When you first get the contraceptive patch you will be given a 3-month supply, to see how you get on with it. If there are no problems, you can be prescribed the patch for a year at a time.

You can get contraception for free, even if you’re under 16, from:

Contraception services are free and confidential, including for people under the age of 16.

If you're under 16 and want contraception, the doctor, nurse or pharmacist won't tell your parents (or carer), as long as they believe you fully understand the information you're given and the decisions you're making.

Doctors and nurses work under strict guidelines when dealing with people under 16. They'll encourage you to consider telling your parents, but they won't make you.

The only time that a professional might want to tell someone else is if they believe you're at risk of harm, such as abuse. The risk would need to be serious, and they would usually discuss this with you first.